The following are selected ideas and materials mentioned in Professor Liu’s lectures. They are notes designed to supplement a student’s study of the lectures and slides. (Slides contain many of the same materials, but not in a notes style.)

Jump to a Lecture

I. Overture — Across the Ages of Media / Communication / Information

Lecture 1 (Introduction to the Course)

Imagination!—lifting up itself
Before the eye and progress of my song
Like an unfathered vapour, here that power,
In all the might of its endowments, came
Athwart me. I was lost as in a cloud,
Halted without a struggle to break through,
And now, recovering, to my soul I say
‘I recognise thy glory’. In such strength
Of usurpation, in such visitings
promise, when the light of sense
Goes out in flashes that have shewn to us
The invisible world, doth greatness make abode,
There harbours whether we be young or old.
Our destiny, our nature, and our home,
Is with infinitude—and only there;
With hope it is, hope that can never die,
Effort, and expectation, and desire,
And something evermore about to be.

Lecture 2 (The Idea of Media) 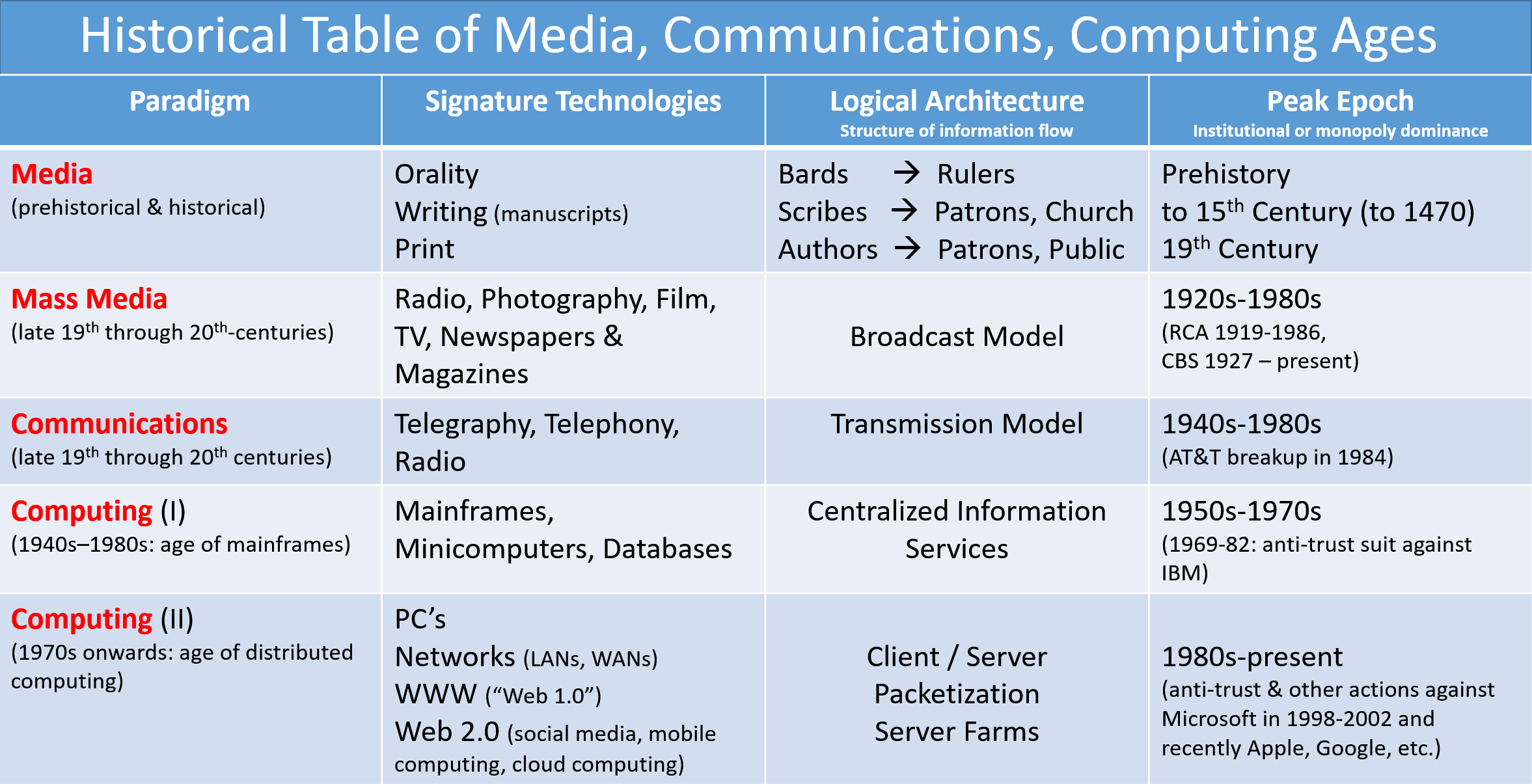 From the Oxford English Dictionary:

Ted Nelson, inventor of the concept of hypertext (beginning in the 1960s)

On the “prosthesis” theory of technology and Marshall McLuhan — Sarah Coffey,  “Prosthesis,” The Chicago School of Media Theory, no date.

Wolfgang Schivelbusch. The Railway Journey: The Industrialization of Time and Space in the 19th Century. Berkeley: University of California Press, 1986. [German edition pub. 1977]

Lecture 3 (The Age of Orality)

Past media ages studied by scholars like Walter Ong include:

Since McLuhan, the “history of the book” field has flourished as a kind of media theory. The field includes:

A current, new way of thinking about media that encompasses both past media and contemporary digital is “media archaeology” (as in the work of Friedrich Kittler)

Milman Parry’s work on Homer’s Iliad and Odyssey, based on:

The Phrase Finder (phrases, sayings, proverbs, and idioms). (Compare to what Walter Ong calls the “close to the lifeworld” sayings of oral culture)

Compare what Walter Ong calls the “agonistically toned” nature of oral cultures to the Old English poem “The Battle of Maldon” (911 A.D.) about battle between the English and the Vikings (in a modern translation):

Byrhtnoth spoke back, raising up his shield,
waving his slender spear, speaking in words,
angry and resolute, giving them answer:

“Have you heard, sailor, what these people say?
They wish to give you spears as tribute,
the poisonous points and ancient swords,
this tackle of war that will do you no good in battle.
Herald of the brim-men, deliver this again,
say unto your people a more unpleasant report:
here stands with his troops a renowned earl
who wishes to defend this homeland,
the country of Æthelred, my own lord,
and his citizens and territory.

Lecture 5 (The Rise of Literacy)

Denise Schmandt-Besserat, “The Evolution of Writing” (a good, short introduction to the invention of writing, beginning with clay tokens for counting and their clay envelopes).

“Render” — “late Middle English: from Old French rendre, from an alteration of Latin reddere ‘give back,’ from re- ‘back’ + dare ‘give.’ The earliest senses were ‘recite,’ ‘translate,’ and ‘give back’ (hence ‘represent’ and ‘perform’)…”

Lecture 6 (Reading in the Information Age?)

Rudolf Flesch, Why Johnny Can’t Read Why Johnny—And What You Can Do About It (1955)

Birkerts, Sven. The Gutenberg Elegies: The Fate of Reading in an Electronic Age. Pbk. ed. New York: Faber and Faber, 2006.

Alan Liu, “A New Metaphor for reading.” In New York Times Room for Debate forum on “Does the Brain Like E-Books?”, 14 October 2009.

Source for image showing a woman with technologies in place of da Vinci’s Vitruvian Man: Katie Warren, “Marshall McLuhan and the Extension of the Human Body.,” Ambient Environments (blog), no date.

N. Katherine Hayles, Unthought: The Power of the Cognitive Unconscious (2017)

“Distant Reading” (use of computers to read in ways humans have never been able to before, including data-mining for patterns and trends)

Taking stock of where we are:

Can “strange books” of the digital age be deeply, closely, intensively [etc.] meaningful?

The three “strange books” assigned for today — Agrippa: A Book of the Dead, “Snow,” and Pry —  are experiments in imagining the future of the book in the digital and networked age.

Codex Sinaiticus, the earliest known manuscript of the Christian Bible, compiled in the 4th century A.D.

Agrippa: A Book of the Dead

The “conversion” moment in William Gibson’s poem in Agrippa (A Book of the Dead):

Transcription of Shelley Jackson’s “Snow” story/poem through the present

Some questions about media in the digital age:

Albert Borgmann, Holding On to Reality: The Nature of Information at the Turn of the Millennium (1999): 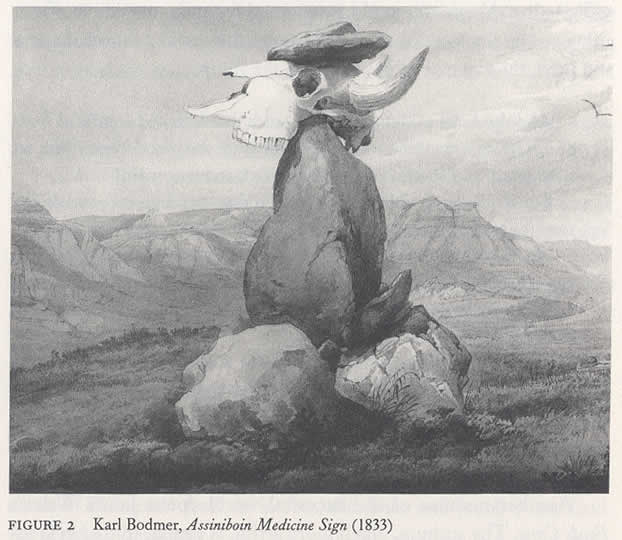 On “time-space compression”: Harvey, David. The Condition of Postmodernity: An Enquiry into the Origins of Cultural Change. Oxford [England] ; Cambridge, Mass., USA: Blackwell, 1989.

Greimas, A. J. Structural Semantics: An Attempt at a Method. Lincoln: University of Nebraska Press, 1983.

Lecture 9 (The Computer Revolution (1): History of the Computer)

Lecture 10 (The Computer Revolution (2): Rise of the Network)

The Personal Computer and the Network vs. the mainframe:

The Rise of the Personal Computer

The Rise of the Internet

Early humanities use of the Internet at UCSB

Lecture 11 (The Computer Revolution (3): The Emergence of Digital “New Media”)

“New media” is media that has been influenced by the new communications and computing technologies.

Walter Ong on the original “new media” of writing technologies

The Rise of Social Media

Films and TV Shows of the 1960s mentioned in lecture as comparisons for The Crying of Lot 49 and its world:

A painting of Ovid’s Narcissus and Echo myth :

The idea of a MacGuffin in film history

References made in lecture in relation to the 1960s contexts of counterculture and the War on Poverty and Civil Rights Movement:

Spray paint of the “muted post horn” around UCSB campus in 2007 (see Inside Higher ED news story, with quotes from Prof. Liu on the event).

[No lecture supplementary notes for this day]

Neoliberalism (and the “Networked Society”)

“Against All the Above”

The Rise of Science Fiction

Closing Speculation for This Unit of the Course

Demos in Lecture of Tools

What is it possible to learn from text analysis?

Other Introductory Explanations of Topic Modeling

“So What?” — What We Learn From Topic Modeling

The Noise of Literature: