Plan for class:  Discussion of “stacks” and “The Stack”

While walking around I acquired a more proximate, physical sense of the site. I could hear the buzz of electrical equipment, feel the burning heat of the mid-afternoon sun baking the pavement, smell the scent of warm chaparral bush mixed with ocean air, and see massive power lines stretching across the hillsides and three large transmission towers further up the mountain. (Parks, “Earth Observation and Signal Territories,” 301)

Stacks are a kind of platform that also happens to be structured through vertical interoperable layers, both hard and soft, global and local. Its properties are generic, extensible, and pliable; it provides modular recombinancy but only within the bounded set of its synthetic planes. It is an autogenerative parametric topography, but one that grows precisely through an initial subdivision of technologies into planar layers and then through an autocratic consolidation and rationalization of these through internal interfaces and protocols. (Benjamin Bratton, 52) (parametric design; examples) 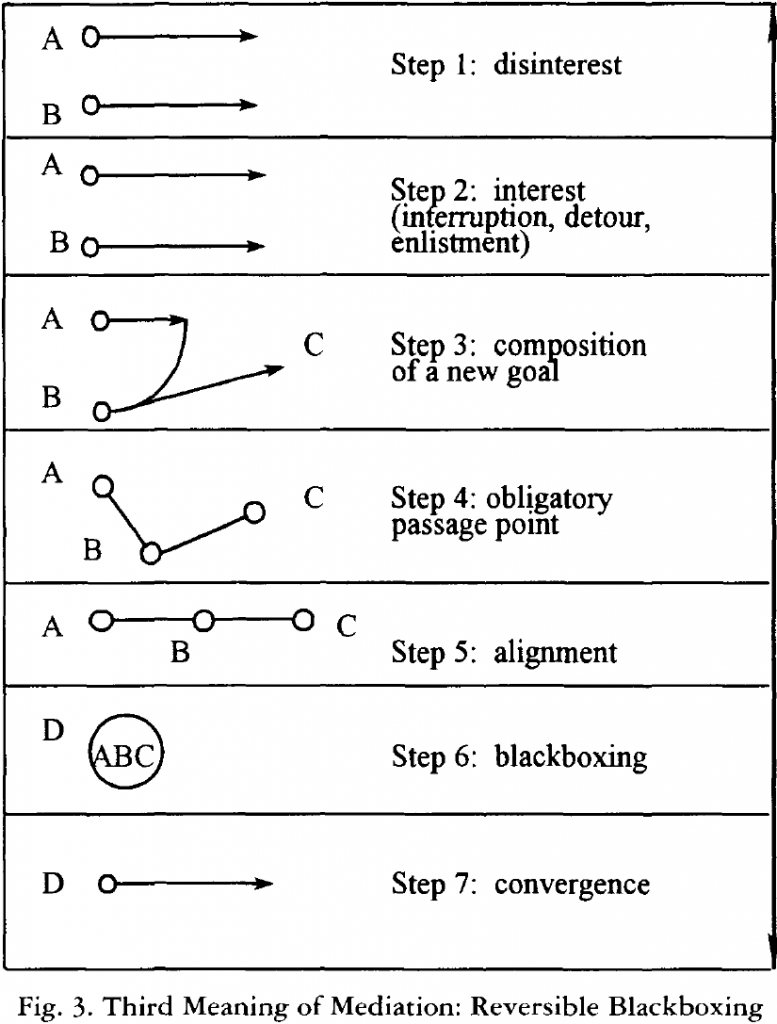 Great Chain of Being e.g., Shakespeare

Troilus and Cressida, I.iii
Ulysses:
Troy, yet upon his basis, had been down,
And the great Hector’s sword had lack’d a master,
But for these instances.
The specialty of rule hath been neglected:
And, look, how many Grecian tents do stand
Hollow upon this plain, so many hollow factions.
When that the general is not like the hive
To whom the foragers shall all repair,
What honey is expected? Degree being vizarded,
The unworthiest shows as fairly in the mask.
The heavens themselves, the planets and this centre
Observe degree, priority and place,
Insisture, course, proportion, season, form,
Office and custom, in all line of order;
And therefore is the glorious planet Sol
In noble eminence enthroned and sphered
Amidst the other; whose medicinable eye
Corrects the ill aspects of planets evil,
And posts, like the commandment of a king,
Sans cheque to good and bad: but when the planets
In evil mixture to disorder wander,
What plagues and what portents! what mutiny!
What raging of the sea! shaking of earth!
Commotion in the winds! frights, changes, horrors,
Divert and crack, rend and deracinate
The unity and married calm of states
Quite from their fixure! O, when degree is shaked,
Which is the ladder to all high designs,
Then enterprise is sick! How could communities,
Degrees in schools and brotherhoods in cities,
Peaceful commerce from dividable shores,
The primogenitive and due of birth,
Prerogative of age, crowns, sceptres, laurels,
But by degree, stand in authentic place?
Take but degree away, untune that string,
And, hark, what discord follows! each thing meets
In mere oppugnancy: the bounded waters
Should lift their bosoms higher than the shores
And make a sop of all this solid globe:
Strength should be lord of imbecility,
And the rude son should strike his father dead:
Force should be right; or rather, right and wrong,
Between whose endless jar justice resides,
Should lose their names, and so should justice too.
Then every thing includes itself in power,
Power into will, will into appetite;
And appetite, an universal wolf,
So doubly seconded with will and power,
Must make perforce an universal prey,
And last eat up himself. Great Agamemnon,
This chaos, when degree is suffocate,
Follows the choking.
And this neglection of degree it is
That by a pace goes backward, with a purpose
It hath to climb. The general’s disdain’d
By him one step below, he by the next,
That next by him beneath; so every step,
Exampled by the first pace that is sick
Of his superior, grows to an envious fever
Of pale and bloodless emulation:
And ’tis this fever that keeps Troy on foot,
Not her own sinews. To end a tale of length,
Troy in our weakness stands, not in her strength.

1. As opposed to other macrogovernance institutions, platforms do not work according to detailed premeditated master plans; rather they set the stage for actions to unfold through ordered emergence. (Bratton, 47)

7. Like centralizing systems, platforms consolidate heterogeneous actors and events into more orderly alliances, but they themselves are not necessarily situated in a true central position in relation to those alliances in the same way that, for example, a master planning committee or federal capitol building would be. Like some decentralized systems, platforms rationalize the self-directed maneuvers of Users without necessarily superimposing predetermined hierarchies onto their interactions. (Bratton, 48)

17. Platform sovereignty may be planned or unplanned, universal or specific, generative or reactive, technologically determined or politically guaranteed. Platform sovereignty is automatic under some circumstances and highly contingent under others, and it may function differently in relation to different components of the platform system. (Bratton, 51)

Media Infrastructure (“Can you see it?”)

People commonly envision infrastructure as a system of substrates-railroad lines, pipes and plumbing, electrical power plants, and wires. It is by definition invisible, part of the background for other kinds of work. (380)

At the top of any column, a User (animal, vegetable, or mineral) would occupy its own unique position and from there activate an Interface to manipulate things with particular Addresses, which are embedded in the land, sea, and air of urban surfaces on the City layer, all of which can process, store, and deliver data according to the computational capacity and legal dictates of a Cloud platform, which itself drinks from the Earth layer’s energy reserves drawn into its data centers. Paths between layers are sutured by specific protocols for sending and receiving information to each other, up and down, that do the work of translating between unlike technologies gathered at each plateau. In this sense, each layer can then simulate and countersimulate the operations of the other (for Users , Interfaces “simulate” the instrumental capacities of the entire Stack, as the hard and soft networks of the Cloud and City are “translated” one into the other). (67-68)

Lisa Parks, “Stuff You Can Kick”

. . . an infrastructure is difficult to visualize in its entirety within a single frame and as such can help to stimulate new ways of conceptualizing and representing what processes of media distribution are, where they are situated, and what kinds of effects they produce. (356)

As the camera is passed from one lineman to another, the video emphasizes the linemen’s connection to and integration with the pole and constructs what might be described as an infrastructural perspective in that the viewer can see, and indeed imagine, the world from the vantage point of a power pole. (363)

As broadcast signals move through the air, it is impossible to grasp them through the senses. Their movements and trajectories must be put into perceivable forms or discourses, whether maps, visualizations, sounds, descriptions, or creative mediations. The process of transmission can only be perceived indirectly, inferred or intuited through discourse…. (287)

This fusion of an extensive, material infrastructure with an individual’s perceptual and creative capacities speaks to the incredible challenge of infrastructural representation. While telegraphy and railroads helped to augur new perceptual modes and aesthetics articulated with “the annihilation of space and time”…, the map or diagram became the only visual discourse that could represent the vastness of these new national systems in a single frame. (293)

[Undersea cables] are one of the deepest strata of the Internet—laid on the bottom of the seafloor, they appear relatively distant from the user interface and embodied encounters with media content. Signals must traverse several layers of technological systems— down through computer processors, hard drives, and routing protocols—before reaching undersea networks. Beyond this are the numerous systems on which cables themselves depend, from air-conditioning technologies to the labor of maintenance workers. Still further below are fossil fuels that provide energy for cooling and topographic forms that permit the building of transportation networks: nature, as Paul Edwards has observed, is “in some sense the ultimate infrastructure.” . . . Analyzing cables as media infrastructures involves articulating how they invisibly contort the conditions of possibility, geographic dispersion, and cultural perception of media signals. (55)

When circulating media through networked systems, users occupy a particular slice of infrastructure. Their decisions about how and what to produce, consume, and distribute implicitly support different modes of infrastructure development. (66)

By looking back to early new media . . . we can correct the “screen essentialist” assumption about computing and understand better the materiality of the computer text. (Nick Montfort, “Continuous Paper: The Early Materiality and Workings of Electronic Literature” (2005)

Mapping the signal territory in this more affective and physical way required recognizing that the site, which looked quite orderly in Google Earth, was actually quite eclectic and messy on the ground (Figure 9), a scattered archaeology of transmission equipment that was more akin to “high-tech ramshackle” or “twenty-first-century hillbilly.” (301)

Shannon Mattern, “Mission Control: A History of the Urban Dashboard

Jer Thorp, “All the Names: Algorithmic Design and the 9/11 Memorial”